This park was established in 1961 by President Dwight D. Eisenhower to preserve the remains of the Chesapeake and Ohio Canal (the C&O Canal), which had been closed since 1924. The park, which extends along the Potomac River, is almost 20,000 acres in size and received around 5 million visits annualy.

The C&O Canal and its towpath trail runs from Georgetown in Washington, DC. to Cumberland in Maryland. The total distance is 184.5 miles (almost 297 km).

Construction of the canal commenced in 1828, and the first stage of the canal opened for use in 1831. Construction ended in 1850 when the canal reached Comberland. The canal was closed after a series of floods in 1924, when railway transport and improved roads had already made it rather obsolete. During its heydays, the canal was chiefly used to transport coal from the Allegheny Mountains to Washington, D.C. 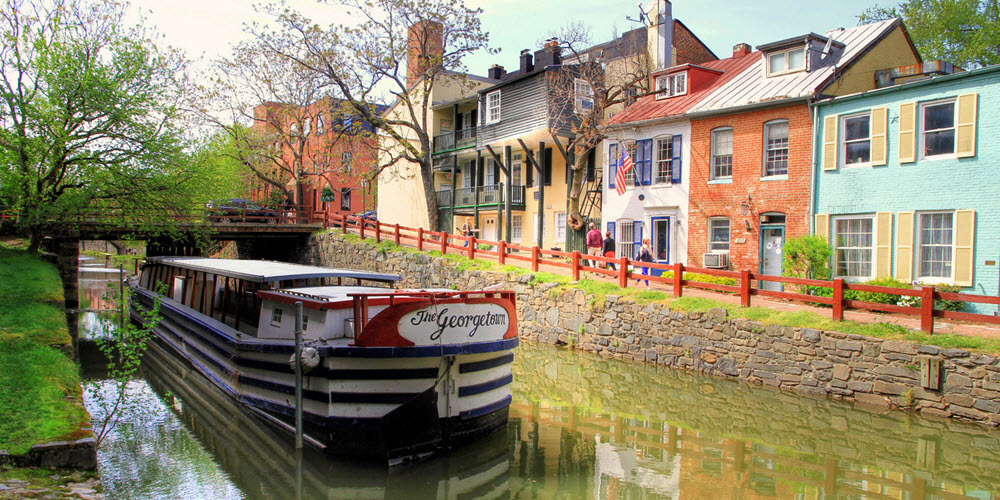 A fee is charged if you access the park through the Great Falls Tavern Visitor Center. Accessing the park anywhere else is free.

Activities in the park

History tours on the canal boats

Two reproduction canal boats travel the canal with tourists onboard: The Georgetown and the CharlesF. Mercer. Tours are available during spring, summer and fall. The canal boats are pulled by mules in the traditional style. Onboard, park rangers wear historical dress and present a historical program.

There are several National Park Service visitor centers for the C&O Canal National Historic Park. Among other things, they feature displays and exhibits where you can learn more about the history of the canal.

In 2013, the path that runs alongside the canal was designated as the first section of U.S. Bicycle Route 50.

Near Harpers Ferry National Historic Park, a small portion of the canal´s towpath is also a section of the Appalachian Trail.

Short facts about the Chesapeake and Ohio National Historic Park

Work on the C&O Canal started in 1828, and ended in 1850 when the canal reached Cumberland. By then, the Baltimore and Ohio Railroad (B&O) had been working for eight years, partly rendering the canal obsolete. Until the mid-1870s, however, C&O canal transport was typically cheaper than railway transport, so the canal did get quite a lot of business. In the mid-1870s the railway largely outcompeted the canal, as the introduction of larger locomotives and air brakes made it possible for the railway to lower its prices. Still, the canal was in use until 1924. A contributing reason to the canal being closed in 1924 was several serious floods.

Originally, the canal was not supposed to end in Cumberland; the plan was to have it continue all the way to Pittsburgh, Pennsylvania. As late as 1874, there were talks about extending the canal by digging an 8.4 mile long tunnel through the Allegheny Mountains.

The federal government obtains the canal and starts restoring it

In 1938, during the Great Depression, the B&O Railroad transferred the abandoned canal to the United States federal government in exchange for a loan from the federal Reconstruction Finance Corporation. The federal government planned to restore it as a recreational area and create job opportunities.

By 1940, the first 22 miles of the canal, from Georgetown to Violettes Lock (Lock #23) had been repaired and rewatered. The work had been carried out by African-American enrollees with the Civilian Conservation Corps. The following year, a canal boat began giving mule-driven rides.

The restoration project was put on hold during WWII. Harry Athey suggested it could be turned into an underground bomb shelter, but his suggestion was not carried out as the area is prone to flooding.

In 1942, the rewatered section of the canal was destroyed by a spring flood. Later that year, NPS official Arthur E. Demaray turned the canal into a matter of national security, as he suggested that a part of it should be restored to serve as a back-up in case the normal conduits bringing water to the important Dalecarlia Reservoir were bombed or sabotaged. By October 1943, the Park Service could resume offering canal boat trips on the restored section.

In March 1954, United States Supreme Court Associate Justice William O. Douglas led an eigh-day hike along the towpath to protest against turning the canal into an automobile road. 58 people participated in the hike, although only nine of them (including Douglas) hiked the full 184.5 miles.

Douglas went on to form the commitee that would eventually become the C&O Canal Association. Their lobbying proved successful, and the canal was saved. In 1958, the entire towpath was cleared to promote hiking, and a 12-mile bicycle trail was created by putting crushed blue stone on the muddy towpath from Mule Bridge in Washington, D.C. to Widewater, Maryland.

In 1961, President Dwight Eisenhower declared the canal a National Monument under the Antiquities Act.