The National Park Service has restored 11 of the 36 rooms, including the former Red Cross offices, parlors, and Barton´s bedroom. The aim is to give visitors an idea of how Barton lived and worked. A guided tour is available for those interested in learning more about how Barton used the house for her work with the American Red Cross. 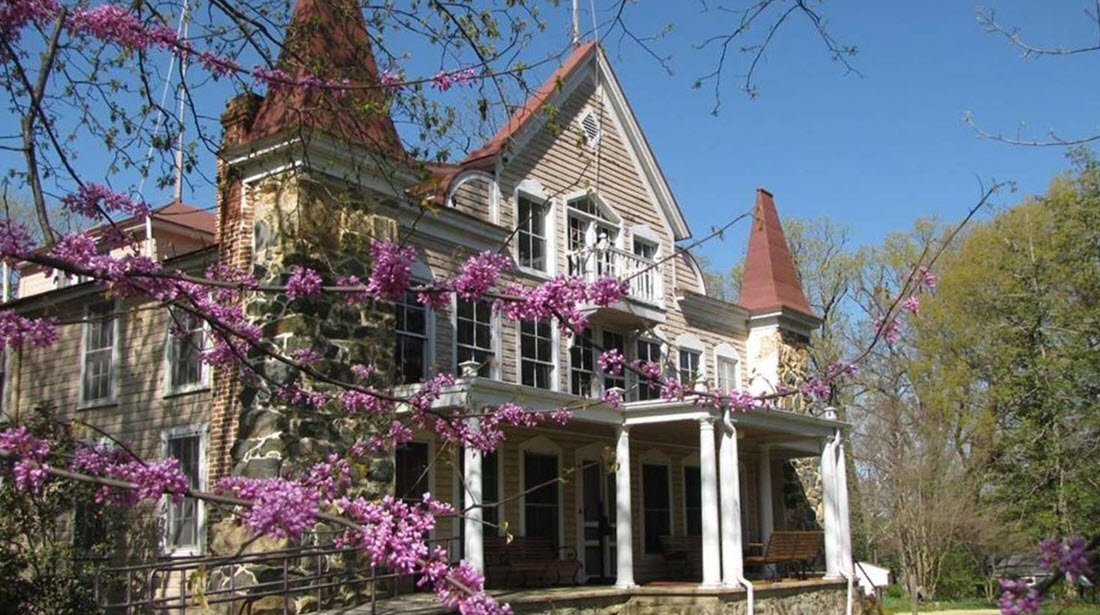 About the Clara Barton House

It was built in 1891 and Clara Barton moved here in 1897. The architech was Dr. Julian B. Hubbell, the first field agent of the American Red Cross.

The house was created with three tiers of rooms facing a central gallery, which was fitted with clerestory colored-glass windows to bring in natural light. In addition to the 36 rooms, the house was built with 38 closets. The house was sparsely detailed, and was furnished for utility. The interior design was inspired by Mississippi River steamboats.

It is a large frame house which was partially constructed using lumber salvaged from emergency buildings that the Red Cross had erected in Johnstown, Pennsylvania after the Johnstown Flood of 1889. When the emergency buildings were dismantled, the lumber was not sold in Johnstown – to avoid oversaturating the market here. Instead, the lumber was transported on the Chesapeake and Ohio canal to Washington, D.C. where it was stored on a lot owned by Barton. In early 1891, the lumber was taken to land in Glen Echo which had been donated by Edwin and Edward Baltzley. The house was built by Baltzley’s construction team, under the supervision of Dr. Hubbell.

Changes to the front

The house was built with a massive stone front, but when Barton moved in the central part of the stone facade was dismantled, creating flanking stone towers.

Clarissa Harlow Barton (1821-1912) was a nurse, teacher, and patent clerk, and is chiefly known for founding the America Red Cross. She was inducted into the National Women´s Hall of Fame in 1973.

Clarissa Barton was born in North Oxford, Massachusetts, to Captain Stephen Baron and his wife Sarah Stone Barton. Captain Barton was a selectman (politician) and member of the local militia, and he fought under General Antjhony Wayne against the Native Americans in the northwest.

When Clarissa Barton was ten years old, her brother David fell from a roof and sustained a severe head injury. Barton nursed during his long convalescence, even after the doctors had given up on him. Among other things, she learned how to administer medication and place leeches on him. He eventually made a full recovery.

When she was 17 years old, Barton achieved her first teacher´s certificate. From 1838, she spent 12 years working in schools in Canada and West Georgia. After her mother´s death in 1851, Barton studied writing and languages at the Clinton Liberal Institute; a coeducational preparatory school established by the Universalist Church.